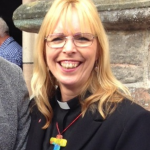 Remembrance Sunday this year marks the anniversary of the end of World War 1, 100 years ago. 100 days of Bible readings began on 4 August 2018, and you can continue with the series on the website www.remembrance100.co.uk. There is a reading and a prayer by different contributors, that we can join in together every day.

I would like to share with you the entry for 1 November, written by our President of Conference, Rev Michaela Youngson:

Reading: “The foreigner residing among you must be treated as your native-born.  Love them as yourself.”

Not Strangers but Citizens
“A short walk from the Syrian/Jordanian border, there is a farm on some of the most arid land imaginable. The Jordanian farmer who tends the land has struggled to produce sufficient crops to support his family. Methodist charity All We Can works in partnership with the Lutheran World Federation to support people fleeing the Syrian war, and has been able to fund water capture systems for the farmer. The ability to keep water has increased his yield and this has meant he has been able to employ four Syrian refugees as farm workers, supporting four other families as well as his own. One of the ways of bringing peace into the world is to support refugees, not just in the short-term with emergency aid, but in long-term projects that are sustainable and respect the needs of host and guest alike.” 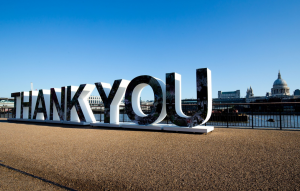 The British Legion have launched a Thank You campaign, to thank 1.1 million British and Commonwealth Armed Forces who lost their lives in the First World War, but also those who played their part on the home front, and those who returned to build a better life for the benefit of generations to come. An 8ft high giant art installation was created, on which members of the public wrote their personal thank you’s. Further information can be found on their website www.britishlegion.org.uk

As we think about the anniversary and our Armed Forces, let us also remember that God is with each one of us; we are not strangers to him, or to each other. In our Remembrance thoughts, let us create space for God and come together in prayerful thanksgiving. In his book ‘Making all things new’ Henri Nouwen says that creating space for God requires us to recognise the Holy Spirit within each other. It’s God’s call to us to share life together and be a community grounded in God, with our priorities on God’s kingdom.

Lord, strengthen our hearts, hands, and minds, to work together for peace;
to see you in one another,
and to seek your kingdom above all things; that your will may be seen to be done,  and your Kingdom come,
through Jesus Christ,
the Lord of lords and King of kings. Amen.
www.remembrance100.co.uk

May His peace be with you.
Rev Ann